PlaceCal has already been rolled out in Hulme and Moss Side. Now it’s being piloted in Moston.

PlaceCal is used by many different people in these communities, but a few particular individuals find parts of their jobs are transformed by using the platform.

Here are two key examples of people who are now benefiting from using PlaceCal in their role already.

Alasdair is a GP at Moss Side Health Centre and he sees dozens of patients a day. We would consider him an end user of PlaceCal.

Many of Alasdair’s patients have problems with their breathing, aren’t able to exercise, or are lonely.

His lonely patients are sometimes the most difficult to help, and he’s only got 7 minutes in which to do it. For example, some patients call for more than 40 ambulances a year to take them to hospital – just to get the opportunity to see another human being.

This type of behaviour places an immense strain on the health services, and sadly it doesn’t really fix the problem.

Alasdair knew what the solution was – but he lacked the infrastructure for it.

Alasdair wanted to “socially prescribe”. This means he would refer people to services in their community instead of only offering medical solutions. The services he could refer them to might be a local group where they can do gentle exercise, or find some social support.

1 in 5 GPs already socially prescribe, and 40% would refer if they had more information about what’s available. (July 2017, GP Online Survey)

It’s was previously very difficult for Alasdair to find out more information about what’s happening in Moss Side. The issue wasn’t a lack of events going on, but the fact that there was no centralised place where he could browse events. Many community groups don’t even have a website.

Health workers have the job of maintaining sprawling spreadsheets or emailing out PDF documents periodically. Unfortunately, these documents have several drawbacks:

PlaceCal is the perfect alternative to these cumbersome spreadsheets and PDFs. Now Alasdair has access to PlaceCal, he can quickly pull up a listing of everything going on in Moss Side for the next few weeks. PlaceCal for Moss Side has hundreds of events listed at any one time. 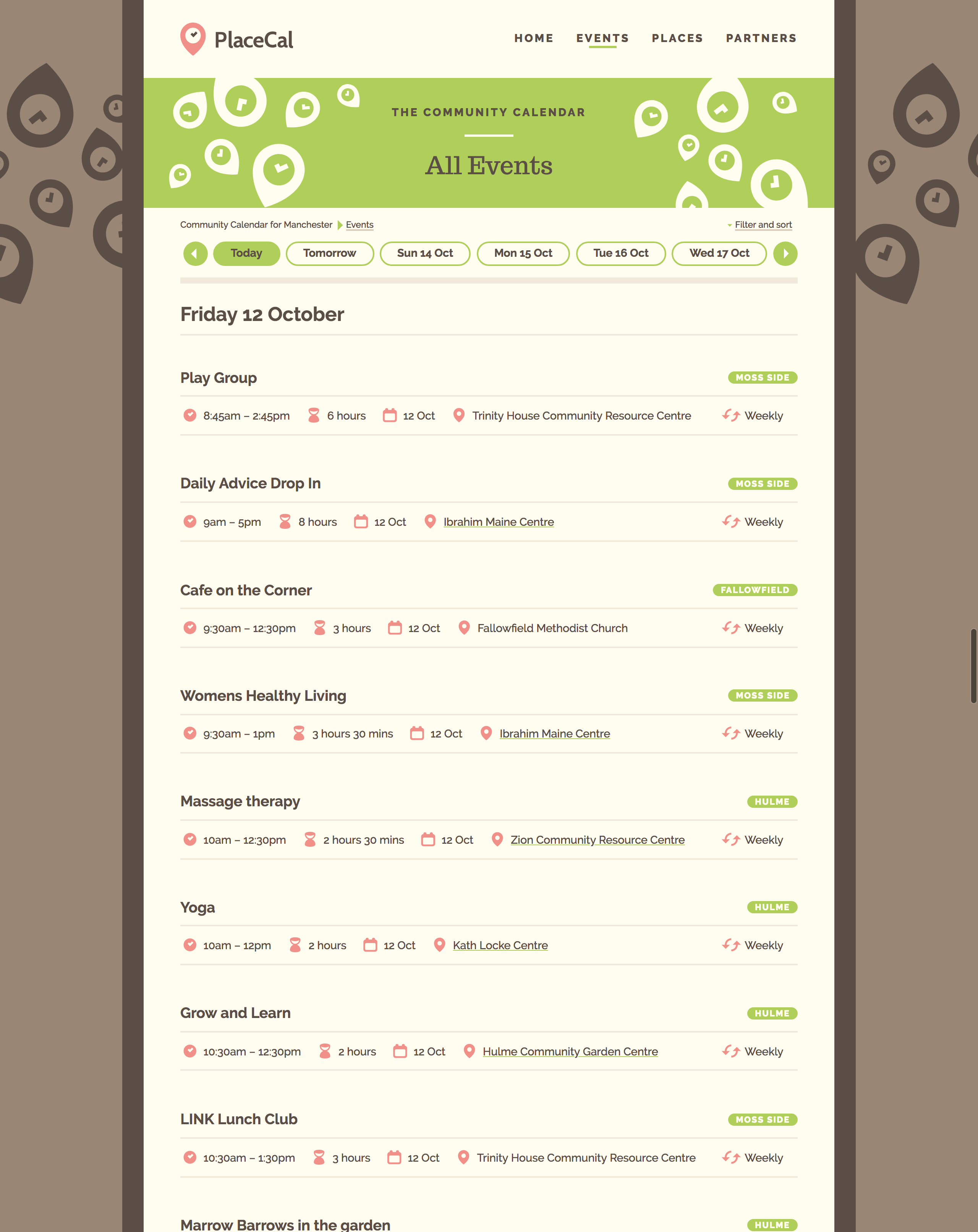 The calendar can be displayed constantly on one of his computer screens during his appointments. This means it now only takes about 30 seconds for him to work with a patient to help them find one of the dozens of events that take place every day.

As a result, Alasdair can now: * Socially connect his patients to local community events * Enable people to find an alternative to taking more medication * Get people moving again after they may have been sedentary for some time 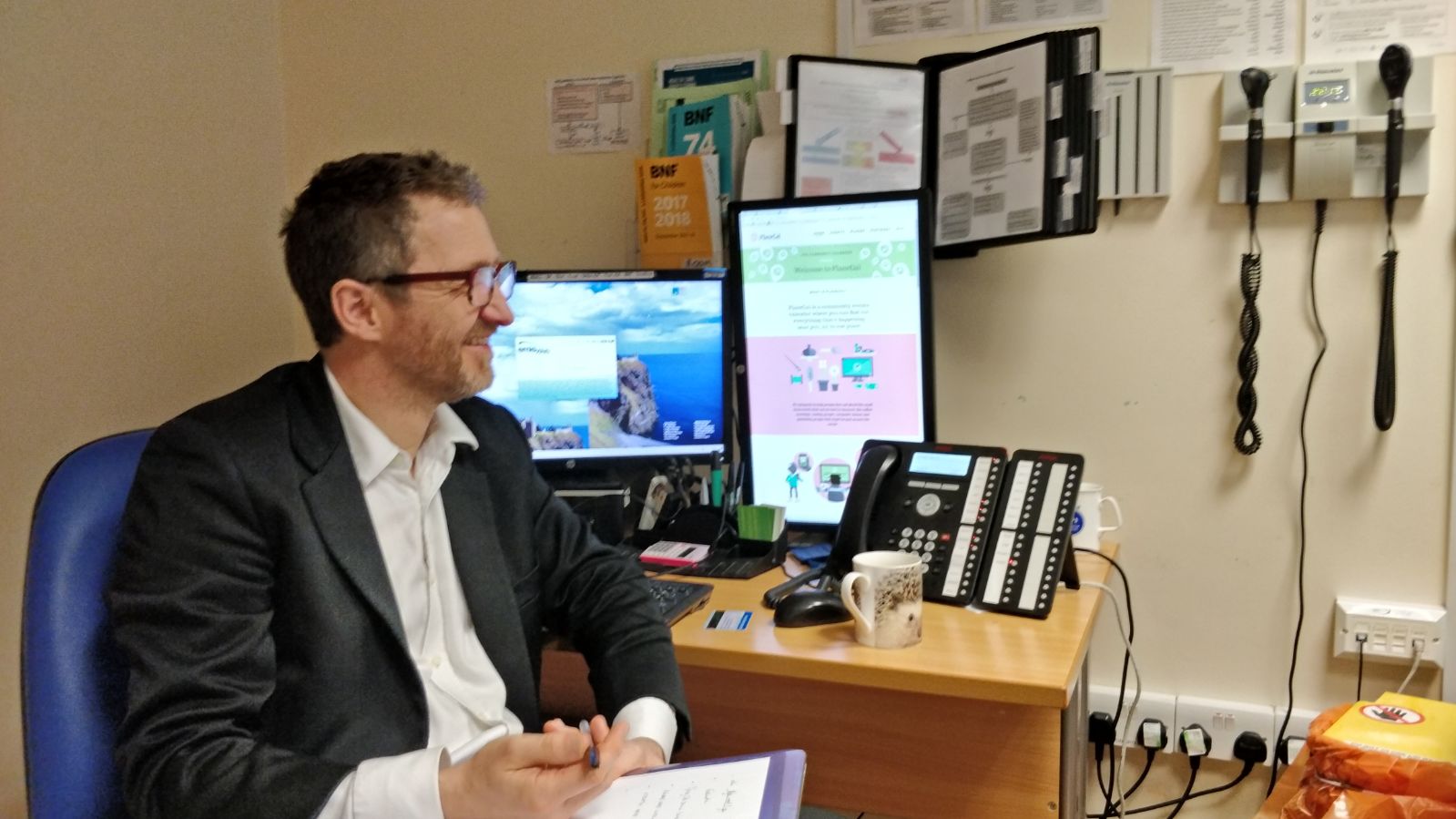 Alasdair using PlaceCal in his practice

Image caption: Alasdair using the PlaceCal calendar in his practice

Find out more about what PlaceCal offers social prescribers like Alasdair

Patsy is a Neighbourhood Health Worker working for Buzz, Manchester’s Health & Wellbeing service. Her role is to work people in Manchester communities to improve their health and wellbeing. Patsy is an example of someone who helps others to promote their events using PlaceCal.

Part of Patsy’s job is “asset mapping”. This means working with local community organisations to find out what they have available, and keeping an up-to-date list of what’s going on.

She sends these listings to people she works with in the health service – people like Alasdair, the GP we talked about in the previous section.

The existing tools Patsy had to work with all had their limitations. They were spreadsheets that weren’t easy to keep current or share, and local council websites that were hard to update and not really used by anyone anyway.

Now by using PlaceCal, Patsy can train up organisations to input and update their own event information. This creates a centralised information source maintained by the people who own the events. Patsy doesn’t have the endless struggle of chasing people to find out what’s on anymore.

Organisations in the community are more digitally included by having access to PlaceCal. They can reach more people for their events, so it keeps everyone happy.

PlaceCal also reduces administration overhead for the area. It helps Patsy to coordinate her work with other people doing asset mapping as well, drastically reducing the amount of duplicate information held by different organisations.

Find out more about PlaceCal’s role in promoting Digital Inclusion.

Patsy and Alasdair were examples of end users benefiting from the PlaceCal platform. Now we’ll look at some of the community groups promoting their events through PlaceCal.

Here are a few examples of setting up a new calendar in practice.

Big Life Centres currently manages two health and wellbeing centres in Hulme. These are the Kath Locke Centre and the Zion Centre.

Before becoming a PlaceCal partner, each venue already had a dedicated staff member who would create a printed events listing every month. However, neither hosted the information on their website. They weren’t reaching as many people in the community as they would have liked.

We came along with the aim of helping Big Life Centres to set up a brand new events calendar for both venues that we could import into the PlaceCal system.

First, we created a calendar for each venue using Microsoft Outlook. One calendar contained every Kath Locke centre event, and the second calendar had the Zion Centre events.

Since all the events for each centre were held on the same premises, we didn’t necessarily have to use the Location field in Outlook. All we had to do was set the location in PlaceCal at the same time as we imported the events.

In the end, we decided to use the Outlook Location field to store each event’s room number, because these were large buildings. Every event can now display an accurate location and room number with minimum effort from the Admins.

The Big Life Centres now have one combined events listing for every event in both centres, and they also maintain separate directories for each venue.

It’s much easier for the Admins to list their events and, by ensuring a wide coverage, they are attracting more members of the community to their centres than ever.

Hulme Community Garden Centre brings the local community together through gardening through providing free access to education and skills training.

Hulme Community Garden Centre were using Facebook to list their big public events like gardening festivals and open days. This was working well, but it meant that people following them on Facebook were struggling to find the right information since it was hard for them to list their smaller events.

They were already using Google’s GSuite tools, and so we helped them create a second calendar using Google Calendar. They shared this calendar with every staff member for their weekly events, which included regular groups like home education lessons, and groups for people with learning difficulties.

We imported both of these calendars into PlaceCal, along with the Facebook events. This approach means that they can still use Facebook to promote their big events, while publishing comprehensive listings on PlaceCal. A bonus is that they can list every event from both Facebook and Google Calendar together on PlaceCal.

Hulme Community are now attracting more people to their smaller events, and they haven’t had to use anymore new software. It’s easier for their staff to organise their groups and communicate the information to their attendees.

The Old Abbey Taphouse use Facebook for all their events due to the great sharing features in Facebook, as they mostly host events for other people that already use Facebook. Facebook allows people to create events and then link them to their Facebook Page afterwards, so all the venue has to do is approve the events. PlaceCal reads directly from Facebook so no further configuration is needed.